John Venhuizen was named President and CEO effective April 1, 2013. In January 2012, John Venhuizen was promoted to Chief Operating Officer. John joined Ace in 1992 and has served in a variety of regional and corporate-based marketing, merchandising, advertising and business development positions. He was promoted to Vice President, Business in 2006, and named Vice President, Business Development, International and Retail Training in January 2010.

John is a graduate of Trinity Christian College and holds a business administration degree and a bachelor of science degree in Marketing.

John joined Ace in March 2009. Previously, he was the president of Skil Power Tools, a division of Bosch Tools, for three years. He also has experience with Home Depot in various merchandising roles, most recently as global product merchant involved with approximately $2 billion in sales, representing 50 product categories and more than 200 suppliers.

John earned a bachelor of science degree in Business Administration at Northwestern State University, Louisiana. He holds an MBA from the Kellogg School of Management, Northwestern University.

Prior to Ace, Lori was employed at KPMG Peat Marwick.

She earned a bachelor of science degree from Northern Illinois University. 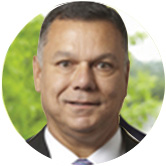 William Guzik was promoted to Executive Vice President in January 2014. He now oversees IT and Legal along with his CFO & Chief Risk Officer responsibilities.

William has successfully led finance teams through complex and challenging environments, helping shape many results-focused strategic initiatives. He worked at PriceWaterhouseCoopers, JG Industries, Delray Farms, LLC and most recently, Midas International, where he was the Executive Vice President and Chief Financial Officer.

William is a Certified Public Accountant. He earned a Bachelor of Science degree from DePaul University.

Kane Calamari rejoined Ace in May 2008 as Vice President of Retail Operations, where he oversaw the field operations, new business and paint marketing teams. In 2014, Kane assumed responsibility for the Human Resources organization, including Organizational Development, Corporate Communications, the Ace Foundation and Customer Care.

Prior to joining Ace, Kane worked at Robert Bosch Tool Corporation, where he was the senior vice president of sales, N. America. He worked for Ace from 1990 to 1998 as a retail marketing manager.

Kane holds a bachelor of science degree in Journalism from the University of Wisconsin-Madison and an MBA from the Lake Forest Graduate School of Management.

In 2018, Kim Lefko was appointed to the position of Senior Vice President, Chief Marketing Officer. Lefko leads the brand’s global marketing and advertising efforts and digital initiatives. Along with her team, she is responsible for developing innovative strategies that further Ace Hardware’s brand promise and positioning Ace as the most convenient and helpful hardware stores on the planet.

Lefko previously served as Chief Marketing Officer at Weber Stephen Products, maker of the Weber grill. In that role, she advanced the leading BBQ brand globally with a focus on digital marketing and integrating technology into the product offering. She led the development of a centralized global website that streamlined e-commerce, fulfillment and services. Prior to that, Lefko served as Senior Vice President of Sales and Marketing, Company Officer at Radio Flyer where she oversaw the development of the company’s first internal Sales and Marketing organization responsible for launching the e-commerce platform for the brand.

Lefko also brings a wealth of experience from her time at Newell Rubbermaid. She held various marketing leadership roles as she helped transition Graco Children’s Products to one of the largest, most profitable business units within the company. Lefko started her career in sales and marketing at Black & Decker with various positions across Product Management and National Account Management.

Prior to joining Ace, Wiborg worked at The Room Place, where he was the Vice President of Marketing.

He worked for Ace Hardware from 1994 to 2010 as an Inventory Analyst, Associate Buyer, Category Manager and Director of Marketing and Advertising.

Wiborg holds a Bachelor of Science in Business Degree from Illinois State University and a Masters of Business Administration from Benedictine University.

Rick Williams joined Ace Hardware in 1988 as a software developer in IT. He worked in the retail division of IT for more than 15 years, and has worked with and supported every department at Ace during his career.

Rick earned his undergraduate degree at Saint Mary's University in Minnesota, and his Masters of Business Administration from DePaul University.

Digital and Retail Strategy and Innovation

In 2018, Bill Kiss was appointed to the position of Vice President, Digital, Social and Customer Relationship Management.

Before being appointed Vice President, Kiss was the Head of Digital, Ecommerce and Retail Strategy at Ace Hardware Corporation. Bill's accountabilities included designing and implementing an Omni-channel brand position; running the Online Business Unit; and innovating and improving the overall retail business model for the company.

Prior to Ace, Bill was Chief Marketing Officer for Sears Holdings, the parent company of Sears and Kmart where he oversaw the company’s marketing strategy and spend of print, broadcast and digital. Prior to that, Bill was the Chief Digital Officer for the company where he was instrumental in the company’s progress in the digital space, with Sears achieving “genius status” per Ad Week, while also delivering sustained double digit ecommerce growth. Additionally, Bill has served as Chief Marketing Officer and Online General Manager for the Craftsman Brand and Tools and Hardware business unit of Sears Holdings.

Bill started his career at the Leo Burnett Advertising Agency working in planning roles for clients such as Procter and Gamble, McDonald’s and Kraft. He then worked for Burger King where he helped develop the successful back-to-basics and breakfast marketing strategies, and then went on to Laughlin Constable’s advertising and marketing consulting group, where he led strategic brand marketing projects for multiple consumer retail and package goods brands, including Wolverine World Wide, Pizza Hut and Firestone.

Enright joined Ace Hardware in 2010, and held various roles within the Category Management team during his first four years. His responsibilities included retail product mix and pricing. In 2014, Enright was promoted to the CRM Analytics Manager, where he led the team responsible for Ace Rewards customer segmentation, reporting, and analytics.

Prior to joining Ace, Enright worked for Molex Inc. where he held positions in Inventory Planning and Product Management.

Enright holds a Bachelor of Arts degree in Marketing from North Central College.

Steve Locanto joined Ace Hardware in 2014, as Corporate Controller where he oversaw the implementation of multiple new and highly-complex accounting standards, as well as significant changes to Ace Hardware's core business. Locanto was promoted to Vice President, Controller in 2019 after leading the Ace accounting function through substantial changes including the integration of financial results for Emery Waterhouse, Jensen, Emery Jensen Distribution, The Grommet, Great Lakes Ace and Handyman Matters.

Prior to joining Ace, Locanto had a 20-year career with Navistar International where he held several different positions within finance including the Assistant Corporate Controller. Prior to his time at Navistar, Locanto spent six years with Household International as a Senior Internal Auditor, Financial Analyst and the Manager of Financial Planning & Analysis.

Locanto holds a Bachelor of Science degree in Accountancy from Northern Illinois University. He is a Certified Public Accountant, a Chartered Global Management Accountant and is a member of the Illinois CPA Society and the AICPA.

Chairman of the Board

Served as a director since 2012

Served as a director since 2018

Stores: 4 stores in the Spicewood and Austin areas in Texas

Served as a director since 2019

Served as a director since 2016

Served as a director since 2020

Stores: Two-store Ace chain in New York City, one of which is located in Brooklyn and the other in the Rockaway Park section of Queens

Served as a director since 2014

Mark Schulein is president of Crown Ace Hardware, a 16-store chain in southern California and Arizona, a position he has held since 2004. Mr. Schulein has worked in this family business since 1994.

The best business advice he has ever been given: "No matter if you are selling shoes, cars or expensive watches, it is a people business. Take good care of them."

Advice for other Ace owners: "Create a culture of service and excellence; and lead by example."

The most rewarding part about owning your own business: "Making a difference and providing opportunities in peoples' lives; both for our customers and our team members."

Served as a director since 2021

Mark is the owner of DriBar Ace LLC, which opened the Ace Hardware and Pet Supply in Sugar Grove, Illinois in 2014. Prior to Ace, Mark spent 38 years in the grocery business, with the last 27 of those working for Supervalu, Inc., a grocery retail and wholesale company. He spent the first half of his career there working with independent retailers supplied by Supervalu in the Midwest, Southeast, and then nationally and internationally. After Supervalu acquired Albertsons, he served as the Vice President of Sales and Marketing of Jewel Osco in Chicago, from 2007 through 2008, and the VP of Operations of Jewel Osco from 2008 through 2012. He ended his career at Supervalu as Corporate Vice President of Retail Operations where he oversaw 1,100+ supermarkets across the country. For the past four years, Mark has been the Northwest Chicago Dealer Group leader. He also served three years on Ace’s Marketing RIT and three years as a Director on the Windy City Ace Stores Governing Board of Directors. In addition, Mark has served on several charitable boards including the Cub Foods Charitable Foundation and the SVU Charitable Foundation. He attended UW- Eau Claire and holds an Associate Degree in Supermarket Management from Dakota County Technical College in Rosemount, Minnesota, and a Mini-MBA from the Minnesota Management Institute of the University of Minnesota School of Business.

Served as a director since 2014

Co-CEO of CCA Global Partners a cooperative of more than 2,500 independent retailers specializing in the floor covering and home remodel business..

His favorite saying is: “‘If it is to be it is up to me,’ set your sights on achieving important things, take the initiative, and then make then happen!”

Served as a director since 2017

Kirsten Pellicer is a second-generation store owner of Ace Hardware in Longmont, CO. She has been involved in the family business in various roles since its inception, becoming Owner and President in 2017. During her career with Ace, she has been a member of both the Board and Advertising Committee of Rocky Mountain Ace Stores and has served on many Retail Input Teams with Ace Hardware Corporation. Ms. Pellicer has been a member of Twin Peaks Rotary since 1998 and has held various Board positions, including serving as its President in 2020. She also currently serves on the Board of the Longmont Downtown Development Authority and has also served with several local charitable organizations. She earned a Bachelor of Science degree from Adams State University and MBA from the University of Colorado.